A couple of weeks ago my friend Debbie and I walked (and ran a little) half of the Cincinnati Pig Marathon together.

Last weekend my friend Cee and I ran (and walked a little) of the Atlanta Race for the Cure 5K together.

I realize that might not seem like a big deal, and maybe it’s not in the big scheme of things, but after the marathon they both raced for my cure when I was diagnosed with cancer and going through chemo, it seemed fitting, right, necessary, good.

Debbie (#104 on my list of 1000 gifts) and Cee (#105) were kind of the CEOs, of sorts, of chemo details in the Evanshire. They got together, and got all my friends together, to bring meals every day of every “bad” chemo week. It was. Such. a HUGE. relief. And feeding my picky family can be a lot like a marathon. [Note: I don’t think the term mess hall originated with trying to feed my picky peeps, but then again…]

So a couple of weeks ago Debbie and I did the half-Pig (#106) together. Luckily, writing my book has gotten me used to not sleeping, because I had to wake up at 3 a.m. since pigs apparently take off while it’s still dark. (I didn’t know this when I signed up.) The thing about Debbie and marathons is that she is practically the boy scout of marathoning—prepared. If you know me, you know I pretty much fly by the seat of my pants most of the time, and it probably frustrates you practically to death. Sorry.

It misted off and on but luckily Debbie had told me to pack a rain poncho, and as much as I’m on strike against wearing hats these awesome hair days I’m having, I was glad I brought a hat since my glasses don’t have windshield wipers. Thank God it was warm outside; the mist actually felt good. Except for the fact that my soggy feet (from the chemo) actually, for real, got literally soggy. I could hear my socks squishing and it was gross. (But not as gross as the port-o-potties. Apparently runners keep running when they “go” and they don’t have very good aim.)

As for the socks, no worries, because, of course, Debbie had thought ahead and told me to pack an extra pair.

We mostly walked the 13.1 miles. Of course we ran at the start, which was a lot like walking, with all those runners who can’t aim. We also ran across a bridge over the Ohio River. The cool thing about running over a bridge over the Ohio River it’s literally running from Kentucky to Ohio. Which feels really far and kinda badass. It also feels badass to run downhill, which we did. But not wee wee wee all the way home.

We did run across the finish line though. I can’t help it if all those peeps thought we actually ran the whole way and there wasn’t really time to explain. We totally got busted and shooed away when we tried to go back and take a pic by the “Finish Swine”. And I wasn’t even sure if I could finish it at all. But I so freaking did. (Seems I caught something from the Pig though, and now I simply must do a Komen 3-day, and someday run the 1/2 Pig.)

Last weekend Cee and I took Team Shaken Not Stirred (#107) on the road and raced for the cure (#108) in Atlanta (#109). It was the first time I ran a whole 5K. Well, mostly ran. There were a couple of uphills that I didn’t exactly channel my Little Engine on, but instead decided to pace myself and possibly finish rather than for sure roll down the hill all the way back to the start line. The thing about running 5K’s with Cee is that she really races for the cure. I thought about tying myself to her and just flying behind her like a kite but then I got caught up in the spirit of racing for the cure and found out that I can actually run a 5K. Well, almost but not quite a whole 5K, if we’re being technical, but then I don’t sound nearly as awesome. Whatever.

Anyway, I have to give props to the Atlanta Race for the Cure peeps for tricking me into running my first 5K (#110). They didn’t have mile-markers, so I never knew where I was in the course, so the finish line shocked the you-know-what outta me. And that, pretty much was my trick to the finish. I kept waiting for the one-mile marker (that never was) and inside I was thinking how very discouraging it was going to be to finally see it and know I still had so many miles to go. And then all of a sudden there was the finish line! Talk about a big “whew”.

Here’s why racing for a cure is such a big deal to me.

1) It reminds me that I get by with a little help from my friends.

3) It is a metaphor to me for moving forward. Though not forgetting. And forging ahead with great purpose.

4) It might be a small thing, but like Mother Theresa said, “”Not all of us can do great things. But we can do small things with great love.” And like the words etched into the Vineyard  Cincinnati says, “Small things done with great love will change the world.” 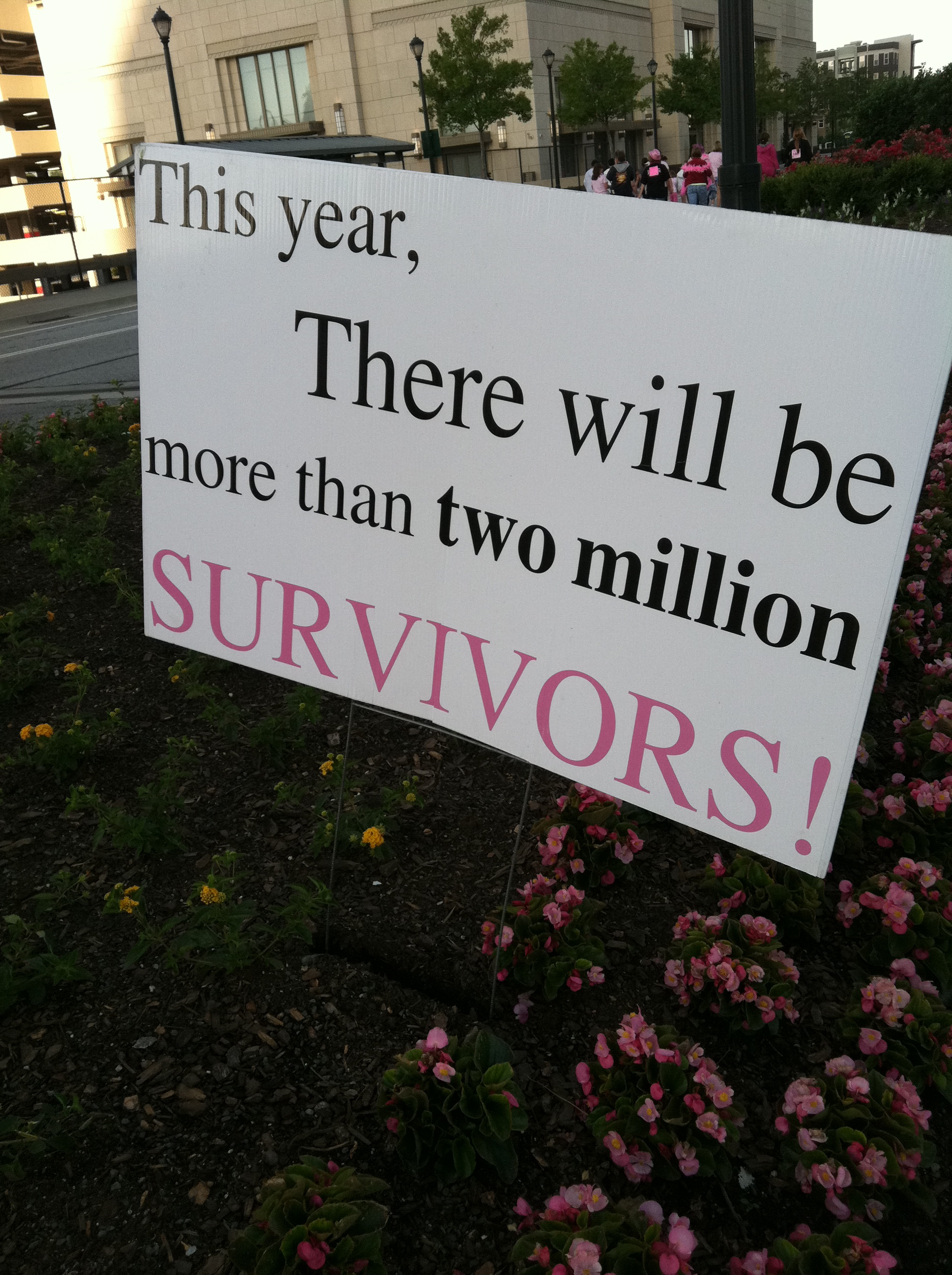 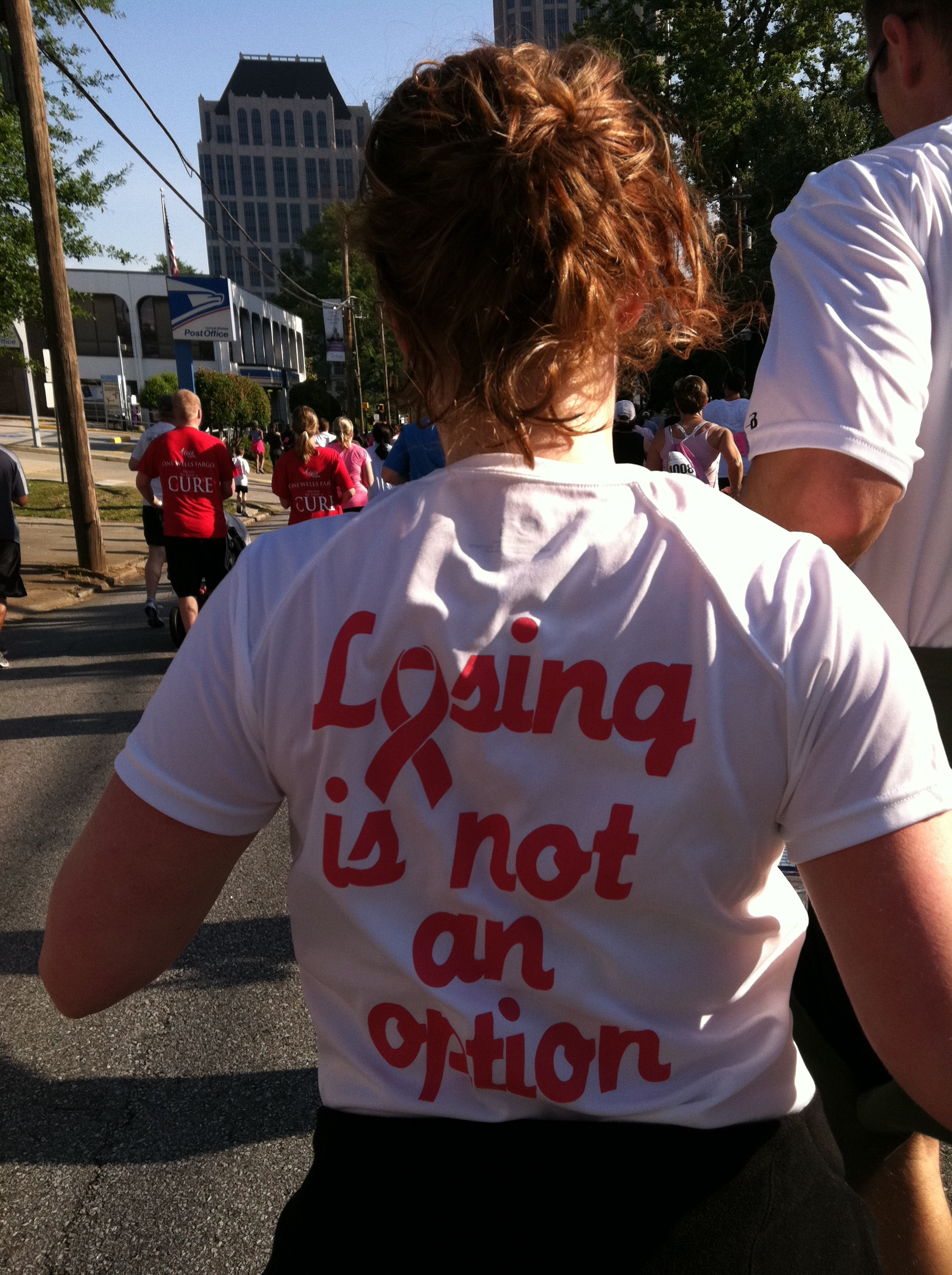 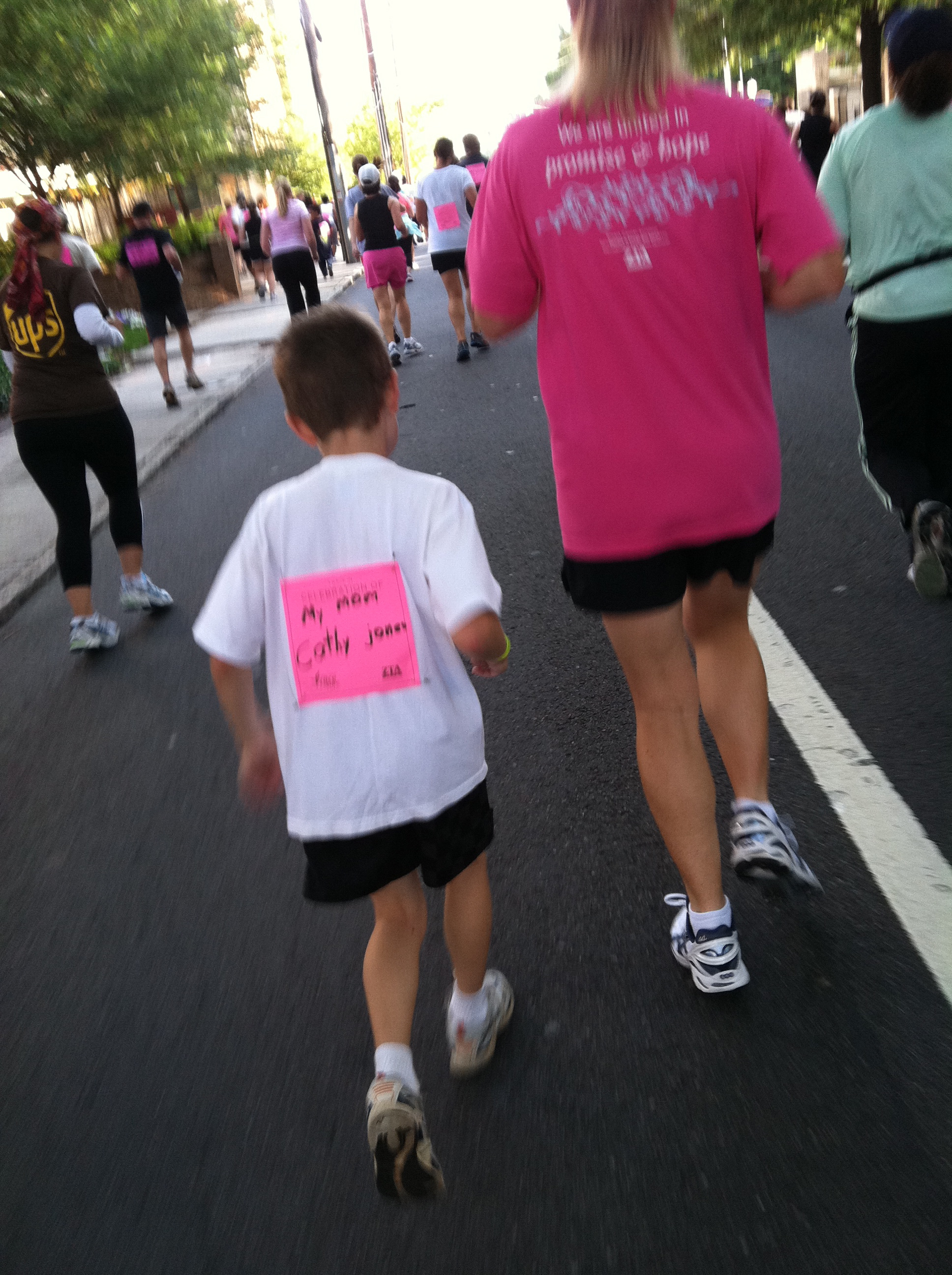 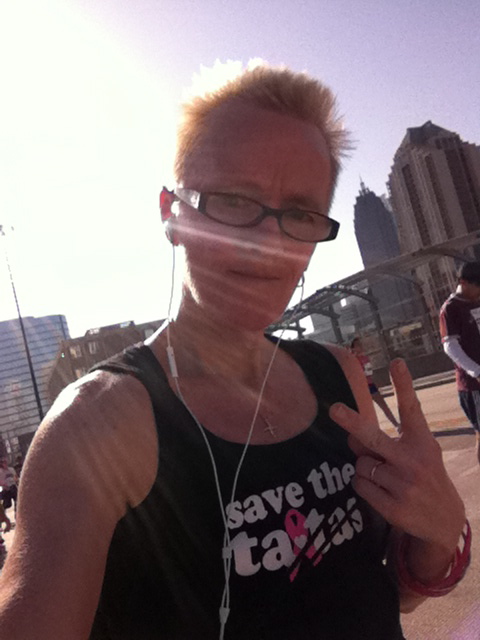 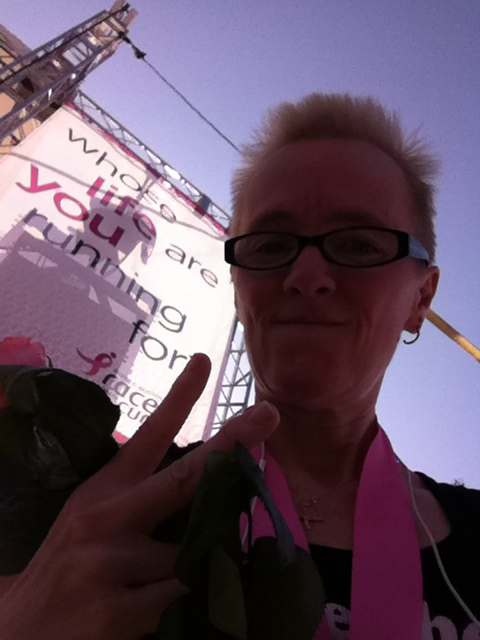 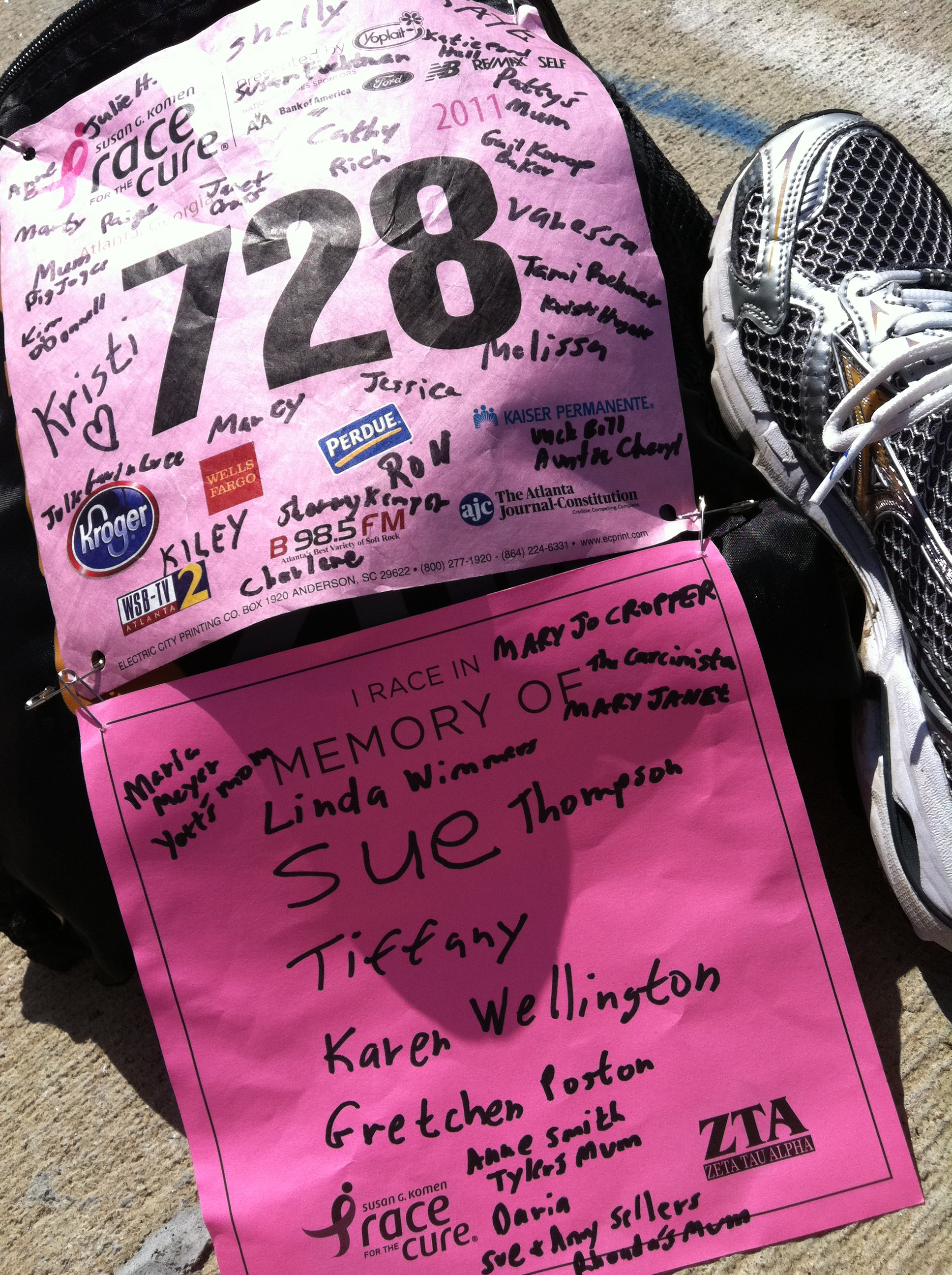 And in a few hours I’ll be racing for a cure in Columbus with my friend Kristi (#111) and Team Kickin’ It With Kristi. Please pray with me for Kristi. She just finished 12 brain radiation treatments today which we hope and pray  zapped all the cancer cells poof away….she’s doing the race for the cure tomorrow….then begins chemo later this month to shrink tumors in her lungs. If you’re on Facebook please join the Prayer “Chain for Kristi Frazier” group.

Well, I better get a little sleep before the race;)

Error type: "Forbidden". Error message: "Access Not Configured. YouTube Data API has not been used in project 475019164081 before or it is disabled. Enable it by visiting https://console.developers.google.com/apis/api/youtube.googleapis.com/overview?project=475019164081 then retry. If you enabled this API recently, wait a few minutes for the action to propagate to our systems and retry." Domain: "usageLimits". Reason: "accessNotConfigured".