I wonder if I’m the only one who thought of this classic Abbott and Costello skit, when the new finding that mammograms actually DO cut cancer deaths by a third, were released this Tuesday. Here’s the MSNBC lead for the story:

Mammograms can cut breast cancer deaths by a third

This, less than two years after the US Preventative Task Force issued a report discouraging women under 50 from mammograms and self exams. Ironically, that report came out the same week my Mum was diagnosed with breast cancer after having a mammogram. Granted, she’s over 50, but it was her first mammogram. For one thing, my Mum hardly ever gets sick. I don’t even remember her having a cold the whole time I was growing up. But the real reason she had her first mammogram “after 50” was not because she was in sync with the government recommendations, but because she didn’t have insurance. Thankfully, my Mum happened to catch a news segment where The Little Red Door Cancer Agency of Indiana offered free mammograms… instead of the one with breaking news of the new government recommendations. She had 2 lumpectomies to remove the cancer the mammogram found, then 33 rounds of radiation, and is now, thankfully, cancer-free.

Is this partially because nobody’s been checking second base? Who’s on third indeed? Which one of those 10,000 young women wouldn’t want to be in the third whose lives are saved by early detection?

Thank God there were breast cancer organizations like Save the ta-tas, who saw through the circular argument of “Who’s on second?” and continued to stress breast awareness, encouraging self-exams and mammograms. My friend Julia Fikse, founder of Save the ta-tas, gave me permission to reprint an article she wrote in response to the new findings:

On November 17, 2009 The US Preventive Services Task Force released a statement that said women age 40 to 49 don’t need to have routine mammograms anymore and that breast self-exams aren’t recommended in general. The group found no evidence that self-exams reduce breast cancer death rates, and discouraged teaching women how to examine themselves.

This caused quite a stir, and many prominent organizations stood behind this statement. Not Save the ta-tas. We stood our ground that mammograms help women live longer if cancer is caught early, and if even one life is saved, mammograms are worthwhile. We also believe teaching women (and men) to examine breasts is also potentially life saving.

Yesterday, it was announced in an MSNBC article that Mammograms cut cancer deaths by a third!!! We want you to know of this important finding in case you cancelled your mammogram.

Get your mammogram, it really can save your life!!!

Now, it’s true that I’m practically a walking billboard for this message, not to mention, Save the ta-tas. 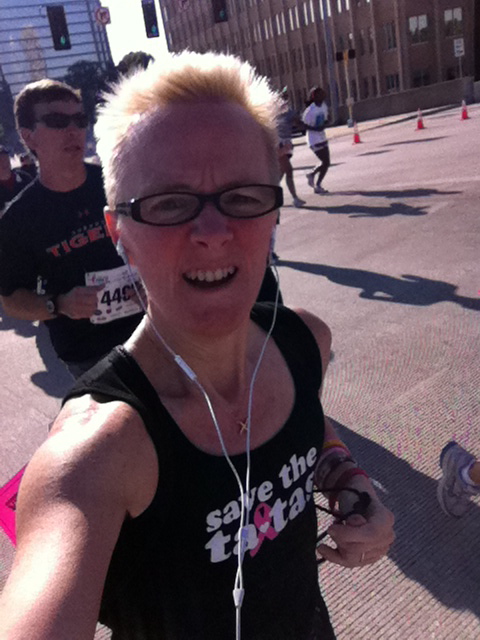 It’s also true that I wouldn’t be sitting here typing these words if I waited till I turned 50 to get my first mammogram.

Because I’m so happy to be here typing these words, I thought I’d share a few words about the mammogram that saved my life. So without further ado, here’s an excerpt from my upcoming book, SHAKEN NOT STIRRED . . . A CHEMO COCKTAIL:

(The following excerpt is from Chapter 3 – Help Me Out God)

I’d never had a mammogram before. PLEASE DO NOT PUT IT OFF until you’re 42 years old and find a lump in your breast, like I did.

Dr. Allen couldn’t find the spot at first. One would think that would be a good sign. At least, we tried to take it as one. I’m a small-framed person, and, to put it frankly, there is not a lot of room for a spot to hide. Maybe my simple prayer: “Out damn spot!” had been answered? Maybe I worked the spot out while I played tennis? Or maybe I had imagined it, after all.

That would’ve been awesome. That would’ve been the end of this story. And I’m not going to lie; there is part of me that would be OK with that. But that’s not how it happened. She eventually found the proverbial X.

Damn spot. It had been elusive due to rather awkward placement, right beneath the “milky way.”

I don’t know why, but I could tell Dr. Allen didn’t seem to like what she’d found. She said she thought we should do a mammogram and an ultrasound to “cover second base.” That was not what I expected her to say, at all. Then she picked up the phone and scheduled the tests for the next day.

I wasn’t scared yet. I had some adrenaline pumping, but not from jumping to conclusions. The things I’d heard about mammograms, and particularly, the squashing involved, made me cringe. I’d always experienced a sympathetic twinge of pain whenever I was with a group of women and the conversation uncomfortably shifted, to the subject of mammogram stories—once everyone’s birth stories were out of the way.

If you saw Casino Royale, you might remember a certain scene in which the most recent James Bond, Daniel Craig, took a few torturous knocks to the groin area. I had to close my eyes because I don’t like seeing people tortured. Or naked, really. And, especially, not being tortured while naked. The collective gasp from the men in the theater during that scene, told me it was one of those “need-to-know” scenes, that I didn’t need to know. They were obviously feeling his pain.

Stories about mammograms and the squashing involved had a similar effect on me. And my overactive imagination did not help things when it came to considering my own impending mammogram. If mammograms were a Facebook page I would not have been a fan. If there were such a thing as a dislike button, I would have pressed it. Yet, I needed to know what that damn spot was, so I didn’t have the mammogram “invite” removed from my events.

On Wednesday, my husband and I went to what is now the Mary Jo Cropper Breast Cancer Center at Bethesda North Hospital, in Cincinnati, to have the scheduled tests.

I couldn’t believe what a big deal my mammogram wasn’t.

In retrospect, it was probably harder on my husband than it was on me. I mean it. I found myself a tad distracted when the technician took out a Sharpie and drew an X right on the spot. Then she remarked that it was at 6 o’clock on my breast. I have to admit that I did appreciate the poetry of the whole X marking the spot. I think I had a lol moment, though, when she told me the placement in terms of a clock face. The spot was actually somewhere between 5:27 and 5:28—but I also round up. For some reason, this thought got a hold of my funny bone and wouldn’t let go, despite the gravity that kept trying to suck me in. And my funny bone is connected to my coping bone. This is where my head was while I placed my breasts in between the mammography plates that squished but not squashed me, and took X-rays of the X that marked the spot.

Dave was not finding himself lost in the poetry of the Sharpie’s X. He was watching his watch, and wearing out a path in the waiting room. He had no distraction; crosswords didn’t cut it. There was no scotch.

The ultrasound was lengthy, due in part to the aforementioned savvy of the spot. But the technician also happened to find two more spots, while searching for the X that marked the first damn spot.

After the tests I remember standing in a very small room while a couple of men in scrubs briefed Dave and me. They said the original spot was about a centimeter, the second was 0.7, and the third was 0.6. They said they all appeared to be solid masses—which didn’t sound good. But they tried to reassure us that it was not necessarily bad news. They recommended we biopsy them all, but stressed I should not go home thinking I have cancer. There were “not bad” solid masses those damn spots could be. We were not there yet. And I honestly didn’t go there yet. Things were spinning so fast I really didn’t have time to look down. To me this was the Hand of God walking me through the vertigo of it all, helping me out. I don’t have any other way of explaining it. Someone much wiser once wrote about “a peace that passes understanding,” which is about as close as I can come to describe it.

I’ve wanted to write a book for as long as I can remember. I had no idea my first book would be a memoir about my breast cancer, anymore than I planned on become a walking billboard for breast cancer awareness. But it is what it is: a self exam and a mammogram saved my life. So I think you should read my t-shirt and listen to me when I say check yourself and don’t let cancer steal second base.

Check out this video from Save the ta-tas about a cool product they offer to promote self exams:

And check out this video from Geralyn Lucas, author of Why I Wore Lipstick to My Mastectomy, on mammograms and what a big deal they are NOT:

Cheers (to you and your health) and love,