A Redheaded Retrospective in 3 Parts

Then. [17 year-old Amanda Michele freaking Evans. Freshman at University of Cincinnati. Journalism student. While simultaneously going to nail tech school. And working part time as a Noodle Ambassador at Noodles & Co. This pic was taken when she and I took a little holiday away from cancer and college to go to Chicago so she could try out for American Idol.] This is what she wrote for my book: 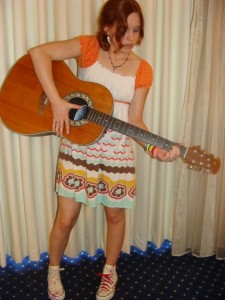 Legends and stories often have more to do with shaping a culture or person than the actuality behind those stories. I like this—I think it’s true. Please, don’t take the following as the word of God, but rather as the discombobulated memories of a girl. The facts here may have been entirely made up.

There is a tremor that runs through this memory—as an earthquake in my brainwaves. We all gathered in my brother Matt’s bedroom. My dad was on speakerphone—he was away somewhere. The doctor was on a different speaker. Gravity was unsure of what to do. The air felt unsteady and wobbled like a depressive drunk. I think it had grown thicker, too, possibly to catch me when I heard what it somehow already knew.

I don’t know what the doctor said. I don’t even remember the doctor’s gender. The only distinct thing that I remember is the sound of an implosion—and then the feeling of being submerged. It felt as though my spinal cord had been snapped and my brain set afloat in the stormy sea of cerebrospinal fluid. I think of the execution of Nicholas II, the last Russian tsar: a family lined up and murdered—shot. My brothers broke. My Mum instantly became mortal. My Dad, though . . . In my memory, there was an audible creaking—as though his spine was an ancient tree being straightened out. A groaning—as though he were a wooden ship being stressed from too much weight. A thump—as this new load, in sickness, dropped on him: the sound of a man becoming Atlas.

I walked away from the room, only able to stand because of the air’s thickness pillowing around me. Everything felt loosened and unconnected as I treaded downstairs to the couch. Be the adult, now—that’s what I was thinking.

I walked up to my Aunt Jennie. So far, so strong. But as I tried to force the word cancer out of my mouth, I found myself to be broken, too. Collapsed. Aunt Jennie’s arms gathered me up, and I remember resting against her breasts. I felt as though I were merely a page in a book and the epitome’s cover slammed heavily against me.

Now. [24-year-old Mrs. Amanda Michele BENTON. Graduated from UC with a degree in Journalism and Creative Writing on June 9, 2012. Got married THE NEXT DAY. Spent their first year of marriage abroad with her new hubby working as missionaries in Wales and Malawi. Now they live in Denver. Amanda is a copywriter and social media manager for two non-profits run by financial guru Billy Epperhart; Gary is studying at Denver Seminary to become an Air Force chaplain. They have two bunnies: Carl Bernard Benton the ginger bunny, and Pichu Bombchu Benton. This pic of me and my baby girl was taken at their fairy tale wedding.] This is what she wrote for my #lucky7 year cancerversary. 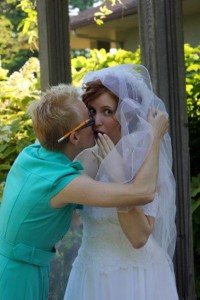 It doesn’t help. Because it really just seems to be the roll of a dice. The question is, who rolled?

I tend to prefer shutting difficult emotions away rather than facing them. This is why I spent the year that my mom spent fighting cancer filling my mind with distractions. Maybe if I tackle a relationship, two different schools and my first job all in one, then I’ll be able to escape from my uncomfortable reality.

I don’t think I cried much that year. I am the undying optimist at times, but that doesn’t mean I’m ignorant. Yes, I know this cancer word floating over us has a reputation for death. No, I don’t want to think about it. Maybe, we’ll beat the odds. Maybe, maybe, maybe, maybe. What if?

I remember breaking down once. I remember a stick shift rendered impossible by a port embedded in her skin. I remember selling the car, and realizing that the woman who once carried me in her body, fed me through her own blood, and destroyed parts of herself in giving me life, this woman was weak. She was small. Human. Sick. Maybe dying.

I realized that something deep was charging like the Rohirrim up the mountains of my throat and I silently shut myself into the laundry room to hurl understanding after understanding out of my body. I didn’t want to understand, but releasing that growth out in the open helped me see how we all were changing. I felt the dice roll and the casino thugs fling me out on the street. Time to figure things out.

But, things got better. Our rapid, strong response saved the day. Or maybe the dice rolled that way, although they didn’t for a lot of other people.

For me, I have some deep convictions about what really went on. And Who was rolling the dice. And why it all worked out in the end for us.

I see health, but I see the ghost of chance hovering over us making us doubt our paths and our futures.

I hate this haunting and wondering. There are doors in my house that I have shut and will not open. I keep them locked and let the dust settle. I explore new hallways and new rooms.

I hate being followed by that which is dead. So I reject it at every chance and choose hope. And so I channel everything into courage for a better future. And still, I am optimism.