That time the hubcap & i were in Maui celebrating our 30th anniversary and we awoke on our last morning to THIS emergency alert (read bottom to top) on our phones: 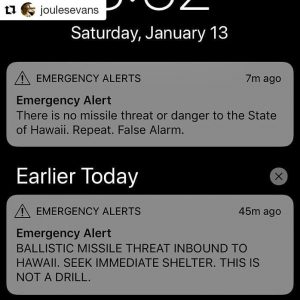 The false alarm aka “OOPS” text didn’t come for 38 minutes. What did I do during that 38 minutes? I called my kids to tell them what was going on, to hear their voices, and to tell them i love them, just in case. And we banded with other travelers who like us had no idea even where to seek shelter. We turned on CNN. We searched Twitter. Somebody was Googling about the alert system and found out that from the alert the estimate is 12-13 minutes before impact. There was a 7 year old girl crying her eyeballs out that I will never be able to erase from my memory not would I want to. I will carry her with me and lift her up the rest of my days. I can’t imagine what she is going through trying to process cuz I know what I’m going through trying to process.

I made this video right after we got the second text. I was still shaking in my boots. Also I may have peed a little. After I finished the video and that #bigwave beer, we packed up, I stopped by the pool and gave the rest of our beers to some peeps sitting in the hot tub and said, “It was a good day not to die with you,” & they gave me one of the best standing O’s I’ve ever received as I dropped that mic & “left the building”. Then we headed to the airport. We swapped war stories with fellow shocked and awed travelers about what are the odds we would be in Hawaii when this happened and I won pretty much hands down, which basically meant that everybody kinda blamed me a little and told me to let them know when and where I’m going at all times so they can avoid any further scary shit like that going down ever again. I remember Dan Rather posting on his Twitter that he felt like Hawaii oughta buy us all at least a drink on the house… but I don’t think Hawaii got the memo cuz I didn’t get a free drink.

So I just wanted to put it out there to #Maui #hawaii the universe that I’m still open to Hawaii making this right. I wouldn’t mind one bit if they wanted to fly me back to buy me that drink. Just please not in hurricane season cuz the odds are not always with me, as being one of the 1 in 8 and getting breast cancer not to mention being in Hawaii one year ago today.