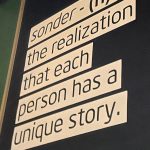 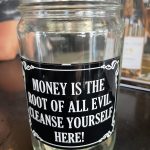 Yesterday was the hubcap’s #Heinz57 birthday. For the next month, he is technically a year older than me & technically my old man. Conveniently, since I am always gonna be one month younger than him, I will never be his “old” lady since we’ve been married since we were 22.

I don’t even remember what life before we got married was even like. Of course, life before cancer/chemo is also a blur. Now that I think about it, I realize I forgot to take any pictures of the hubcap’s super fun lil fam dam bday dinner at Sonder Brewing last night. Except for these 2 signs I saw.

Serendipitously, we ran into our friends Bonnie & Tom Collins & the Live Like Maya Foundation crew doing a fundraiser there. I got to show off all the wondergrands which is my fave thing! Amanda won one of the raffle baskets & then played “the claw” machine like my lsweet ittle warrior sister Maya (RIP) used to do & went home with 2 more prizes.

Dave went home with prizes too aka bday gifts & 5 raffle tickets for the grand prize of the bourbon raffle basket, which will be drawn later, so fingers crossed & there might be one more gift for the birthday boy. I got him snorkeling gear & he’s trying to find some time he can take off to come down to Florida for a much needed break & a holiday together. (I also bought myself snorkeling gear for his birthday so he wouldn’t hafta snorkel all by himself.)

Anyway, the moral of the story is, we ate, we drank, we were merry. I just forgot to take any pics. Except these 2 signs I saw. Sonder Brewing, in 2 pics. Worth 2k words? Yep. Of course, I looked up the word sonder when I got home. Turns out it is a newish word, coined by Joe Koenig, author of The Dictionary of Obscure Sorrows, drawing on his own contemplations of inner emotions. Dude has coined 100’s of words! (I didn’t even know coining words was a job but now I’m a little jelly.) Yep, I already ordered the book & technically it fits under the umbrella of the hubcap’s bday so yay for more gifts! The longer definition in the book is even more delicious. Sonder is the realization that each random passerby is the main character of their own story, living a life just as vivid and complex as your own, in which you might appear only once, as an extra sipping coffee (or beer) in the background. OFMG. If you know me at all, as a human being, writer, or life coach you know THIS IS MY JAM, MY WHEELHOUSE, THIS. IS. MY. CRACK. This is my new fave word. My philosophy in a nutshell. The tip jar in the second image just made me laugh my ass off, which is another tenet of my philosophy aka levity.

And that about wraps the hubcap’s lil fam dam bday celeb recap. Except I also just realized we forgot to sing happy birthday. Also there was no cake. Except maybe the chocolate cookie cigar Amanda gave the hubcap counts? Nonetheless, I’m told by the bday boy himself that a happy birthday was had. Whew. Poor guy has quite a cast of extras in his life, lol.

P.S. I am normally an IPA kinda girl (& I did enjoy my Sonder IPA flight) but I also super dug Sonder’s Kato (blonde ale w/their Kato coffee) & Mexican Hot Chocolate Otto when I “extended the flight” after dinner. Speaking of dinner, we ordered way too much food off the foodie lover kinda menu, just to try a bunch of things and I’ll just sign off this post with the memory of & consequent longing for (need to coin a word for that feeling) …the yummiest grilled bologna sandwich I have ever had & which has consequently ruined me for all other bologna sandwiches for life. SO DAMN GOOD!