I couldn’t help but smile, which helped me relax a little, when she started handing out post-it notes. I love post-it notes. I’m forever putting those sticky reminders all over the Evanshire to try and help me remember shit. Lists. Prayer requests. Blog fodder. Vlog ideas. Quotes. Addresses. Dr. appts. Songs I want to download. People I need to thank. Writing ideas….

But I’d never even thought of using them as an icebreaker before. BAM! Already got my first takeaway from Jen Pastiloff’s Manifestation Retreat that I was on, and we had barely taken our seats, cross-legged, on the floor, side by side, forming a large circle. Like a tribe. At which point Jen handed out smiley face colored post-it notes, each pregnant with possibility, all of them glowing like a blank pages do. Expectant. Waiting to be written.

“What are you manifesting?”

The way Jen threw down those 4 little words was a lot like Bobby Flay throwing down one of his challenges, with some Heisenberg mixed in: Wanna cook? Just. to. shake. things. up. But shaken, not stirred.

I’d driven for 2 days to come to Jen’s yoga/writing retreat in the Berkshires, to kickstart the writing process for a couple projects I was was ready to dive into. I was manifesting a prequel, of sorts, to my cancer memoir, SHAKEN NOT STIRRED…A CHEMO COCKTAIL. And also a sequel, of sorts.

Jen told us to write down what we were manifesting that weekend on the Post-it notes, and then to get up and go stick them in the middle of the circle of the tribe of beautiful souls we hadn’t met yet, but would walk beside, that weekend during Jen’s Manifestation Workshop.

We’d all come to Manifest a certain goal or dream aka to make that shit happen, the way Jen breaks down the word Manifest so there were 40 Post-it notes in the middle of our pow WOW. We’d made it rain Post-it notes. And they were written.

I’d post a picture of it, but I don’t have it. After all the Post-its were out there, sitting there like yellow badges of courage, Jen told us each to get up and grab a Post-it that wasn’t our own. To keep. To remember. To hold what they are manifesting UP. I purposely chose the last yellow badge of courage left on the floor. I do fortune cookies this way too. I could explain, but then we’d end up falling down some rabbit hole. And also I’d probably get hungry thinking about that cookie too much. And squirrel! Like that, this post would be history. So thankfully this post is about Post-its, which are sticky reminders. So hopefully I’ll remember to stay on task. Like I’m remembering the yellow badge of courage I brought home with me, and the beautiful soul behind the badge. It is hanging on a wall in my office, where I keep Post-its of prayer requests and peeps I pray for.

And one of those beautiful souls has mine. But I believe they are all cheering me on, as I am them, as we all are each other. Like a tribe.

“If you knew who walked beside you at all times on this path which you have chosen, you would never experience fear or doubt.”

In honor of that, and in light of that which I was/am manifesting, I thought I’d throw down a possible prologue, of sorts, for the project on the front burner, my homeschool/parenting memoir: HOMESCHOOL HAPPY HOUR… IT’S 5 O’CLOCK SOMEWHERE, KIDS!

The first time I saw my first book, SHAKEN NOT STIRRED… A CHEMO COCKTAIL had finally hatched on Amazon after 18 months of blogging my way through breast cancer, 8 months of writing, and 11 months of editing, it was as if the heavens opened up and I felt so way up high that I thought I really could see somewhere over that rainbow where dreams really do come true… and then I read the fine print. Or rather, the fine misprint in the form of a parenthetical aside to the title: (Volume I). That’s when the sky fell. I was definitely not in the mood for a volume II, to my breast cancer memoir, if you know what I mean.

I got the kink worked out with Amazon, but I guess it’s a fairly reasonable thing that people, whether or not they saw the Amazon typo, started asking me, “When does the sequel come out?” Or, “Is this one going to be STIRRED NOT SHAKEN? Um, no. That wouldn’t be very James Bond of me, now, would it? The truth is, the mere thought of another volume, another chemo cocktail, is where I channel my inner Chicken Little and can picture the sky fall.

Which I can totally imagine being the theme song (and a Bond song to boot) if I were to write that sequel. Which, this is not, thank God, and God willing, may I never have the unfortunate occasion to have that sequel to write.

The last time I saw the sky fall and I found myself smack dab in the middle of my hopefully one and only breast cancer memoir, it fell on top of me and nearly took me out. Literally. It almost killed me.

Like I wrote in the prologue of that hopefully one and only breast cancer memoir, I’ve always been a writer and I have always dreamed of writing books ever since I cracked the code and learned to read. I just never ever would’ve could’ve imagined the story I’d have to, quite literally, “get off my chest” and that would become the subject, not to mention, the antagonist, of my first book. Which, in an ironic twist of fate thanks to the genre gods, landed it in the disease section of Barnes & Noble. This is not the end either, though. Let the books fall where they may. It’s still a dream come true. Not to mention…the last page was not the end of my story. Spoiler alert: the hero of the story is somewhere once upon a time in a not-a-chemo-cocktail kind of a sequel, hopefully a series.

But this is not the end…of that story. Even I’m still wondering what happens next. I mean, c’mon. It’s a memoir not a novel. I don’t write the plot. I just try and go with the flow, enjoying the ride, sharing moments and making memories with the people I love, collecting new friends along the way, keeping a decent travel journal, taking lots of pictures, and sending plenty of postcards.

This is what came before that story. B.C. or before cancer, the prequel to SHAKEN NOT STIRRED…A CHEMO COCKTAIL, which chronicles my “cancer era” or C.E., or my life A.D., after diagnosis, if you will.

Before I became radioactive with a chance of superpowers, using them to fight cancer and also to write, I had some big ass glasses like Clark Kent or Fearless Fly and was holding down a pretty cozy job with ridiculous crazy hours as an accidental homeschool mom.

Back then I taught writing more than I wrote; although I wrote whenever I could, read about writing in all the great books on writing not to mention the classics I assigned my Redheads to read, thought about writing while grading papers, and dreamt about writing one day when we all graduated and I retired.

This is the book I thought I would write first. Kinda my “Confessions of a Homeschool Mom.” After they were all successfully situated in college and I was pretty sure they had all survived homeschool safe and relatively sound.

I was so enchanted with that story and the development of my three main characters that the plot twist when the sky fell and I almost didn’t survive homeshooling not to mention, my life, caught this supporting character by surprise. There’d been no forshadowing. But the sky fell anyway, and when it did there was nothing we could do but let it. So we let it. But on our knees. And together. Before cancer was the unfortunate subject of my book, it was the most unfortunate subject in our homeschool. But it wasn’t the only subject in our homeschool; although in a sense, it tested everything that had gone before the sky fell. Before cancer. So BC is where the confessions of this homeschool mom begins. And might as well start at the very beginning, before BC, to the A. Which comes first in the alphabet. Which is one of the very first things kids learn in school.

Easy as 1-2-3. This was not the first thought that crossed my mind the first time my husband, Dave, brought up the idea of homeschooling our children to me when I was pregnant with our first child. First of all, I hadn’t actually even heard of homeschooling back in 1990 when I was knee deep in What To Expect When You’re Expecting despite the fact that I couldn’t even see my knees for the belly. My first thought was more like, “What the F is homeschool? Then Do-Re-Who-Me?” Then I pretty much summed things up when I hyperventilated, which was a perfect time to practice my Lamaze breathing techniques he he he hahahahahahahaha.

It seems appropriate to end on that note since I only intended to give a little teaser to chapter one.

So this is me, taking the next step and throwing down a shitty first draft of a possible beginning to my next book. BAM! That’s what I’m manifesting. That’s the shit I’m trying to make happen. That’s me, trying to do what I was created to do, what love compels me do. Like Jen says,

“At the end of your life, when you say one final ‘What have I done?’ let your answer be, I have done love.” 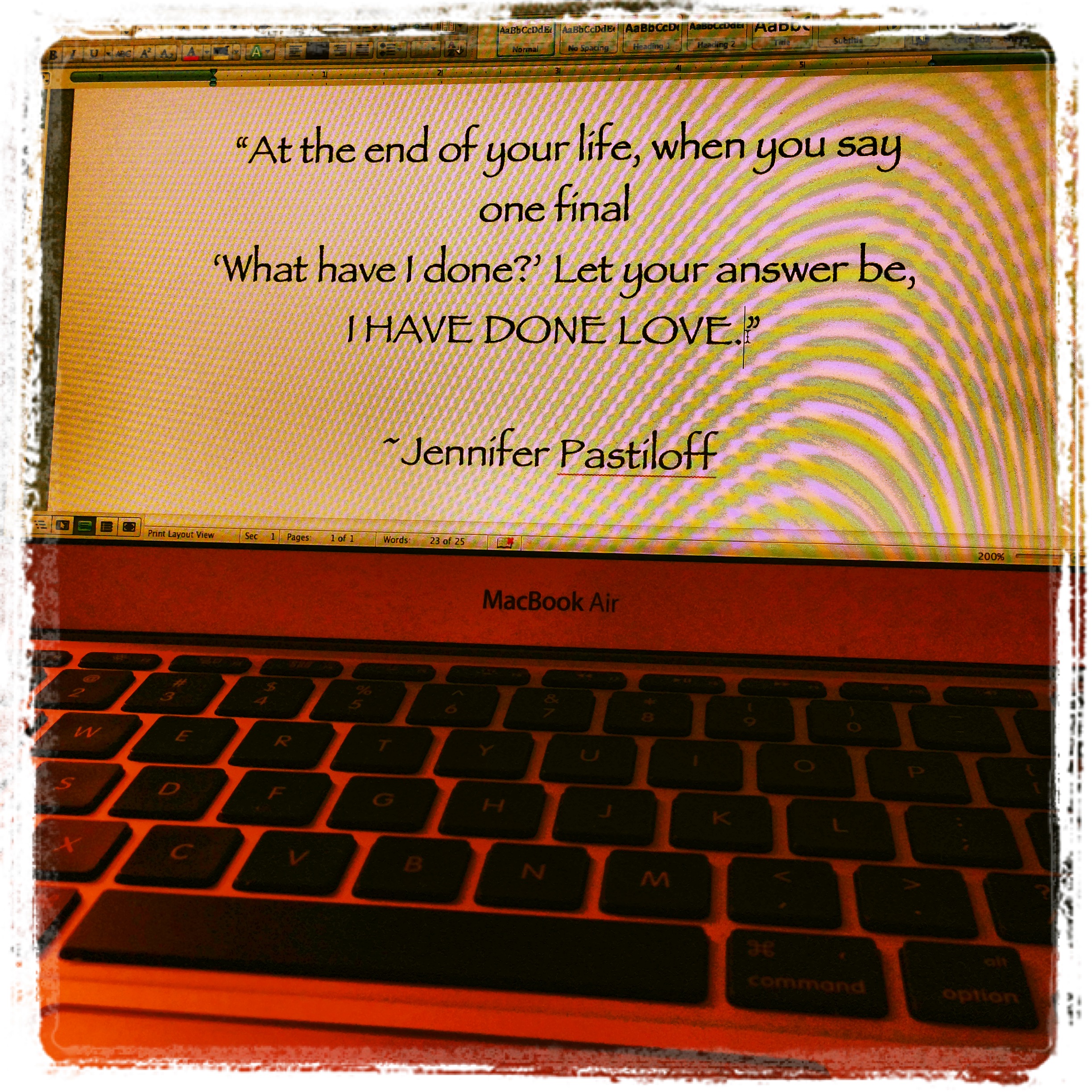 What about you? What are you manifesting? Please share in the comments, or send me an email, or If you want to write it on a Post-it note and snail mail it to me, I will stick it on my wall.