[this article is cross-posted at thescarprojectcincy blog.]

Young Cincinnati breast cancer survivor and SCAR Project subject Vanessa Tiemeier was featured on the Fox 19 News “Think Pink” segment for June. (Click HERE to view.) On July 9th, Vanessa will be one of four young women to be featured in the Style Network’s premiere of Patricia Zagarella’s SCAR Project documentary: “Baring It All.” (Click HERE to stay tuned for more info and the trailer, and of course, please LIKE the Facebook page:) This September 29 – October 2, Vanessa’s portrait in which she bared her breast cancer scars, will be one of 30 featured in the Cincinnati premiere of the Pulitzer nominated SCAR Project.

When I met Vanessa, she was standing beside her portrait at the New York City debut of The SCAR Project last October. 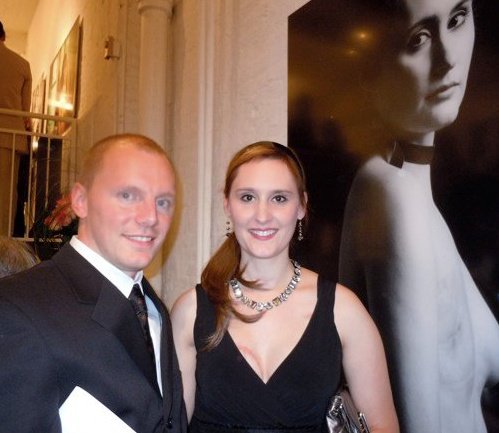 She was talking about her experience being photographed for The SCAR Project. I was struck by a number of things about Vanessa. Besides the fact that she was also a breast cancer survivor from Cincinnati who I happened to meet at an art gallery in the Big Apple when I drove there with my chemo sister Shelly to see the opening of an photographic exhibit Vanessa’s portrait was featured in…she was ONLY 29 and her hair was so long. This was probably only significant to me, because even now I still don’t feel that 45 classifies me as an old breast cancer survivor. (Though technically, I suppose it’s true that I am technically old enough to be her Mum. Hmph.) Anyway, the thing about breast cancer is that it doesn’t have no R-E-S-P-E-C-T. That’s pretty much the message of The SCAR Project, and what Vanessa (my senior in fighting breast cancer) was basically saying: Breast Cancer does not play by the rules. If you thought only old women like me get breast cancer, think again. Young women get it too.
This. Is. Wrong.
Which is why a shy girl like Vanessa would be willing to bare it all, her breast cancer SCARs, exposing them for what they really are: (Surviving Cancer. Absolute Reality.)
I could tell how shy she was the way she kept attempting to defer to her portrait, pointing our eyes onto it, when we were looking at her. She had something to say about her absolute reality of surviving breast cancer, but she wanted her portrait to speak. “That’s why I decided to do be photographed for The SCAR Project,” she told me. “I don’t communicate verbally as much as I do visually. It was a way to talk about it without talking about it. I know it’s cliche about a picture being worth 1000 words, but that was my idea behind it.” I could tell how proud she was of her portrait, and to be part of The SCAR Project, because it was bigger than herself with its message of breast cancer awareness for young women, like herself. I noticed this in all the young breast cancer survivor SCAR Project “models” I met that night. Each of them had bared it all, exposing beauty in spite of SCARs, and courage in the face of breast cancer, not to mention, a society where some women are sick of pink and every man’s a breast man.
This humility was probably one of the things that struck me most about Vanessa. It was not in her plans to become a face for young women with breast cancer. Her plans were simply to get married and have a big family. She fell in love and got married at 24. Nine months later…instead of the baby carriage part that was supposed to come next…she had the cancer part to deal with. Then when she was re-diagnosed three years later, before she was finished with treatment and given the go ahead to try and try to fill that baby carriage, she was faced with the absolute reality of a hysterectomy and not having children. “That was the most difficult part to swallow,” said Vanessa.
“I don’t really make plans anymore,” she continued, when I asked her what her plans were now. “I’ve learned plans are crap and to cherish the moment. This moment. I try do this day by day and spend time with the people that mean the most. Try to be the best aunt, wife, sister, daughter I can be. Yeah,” she finishes up with a happy sigh, obviously savoring the moment of thinking about each of those roles and the ones she loves.
This again strikes me. Note she didn’t say anything about her unassuming role in being one of the faces of young women facing breast cancer. Obviously, that wasn’t in her plans. But there she is, beautifully embodying it, embracing each moment.
It’s like blooming.
It’s like turning the tables on cancer. Which reminds me of this song, by Vanessa’s sister Christina Blust. Tumor you are so freaking mistaken.