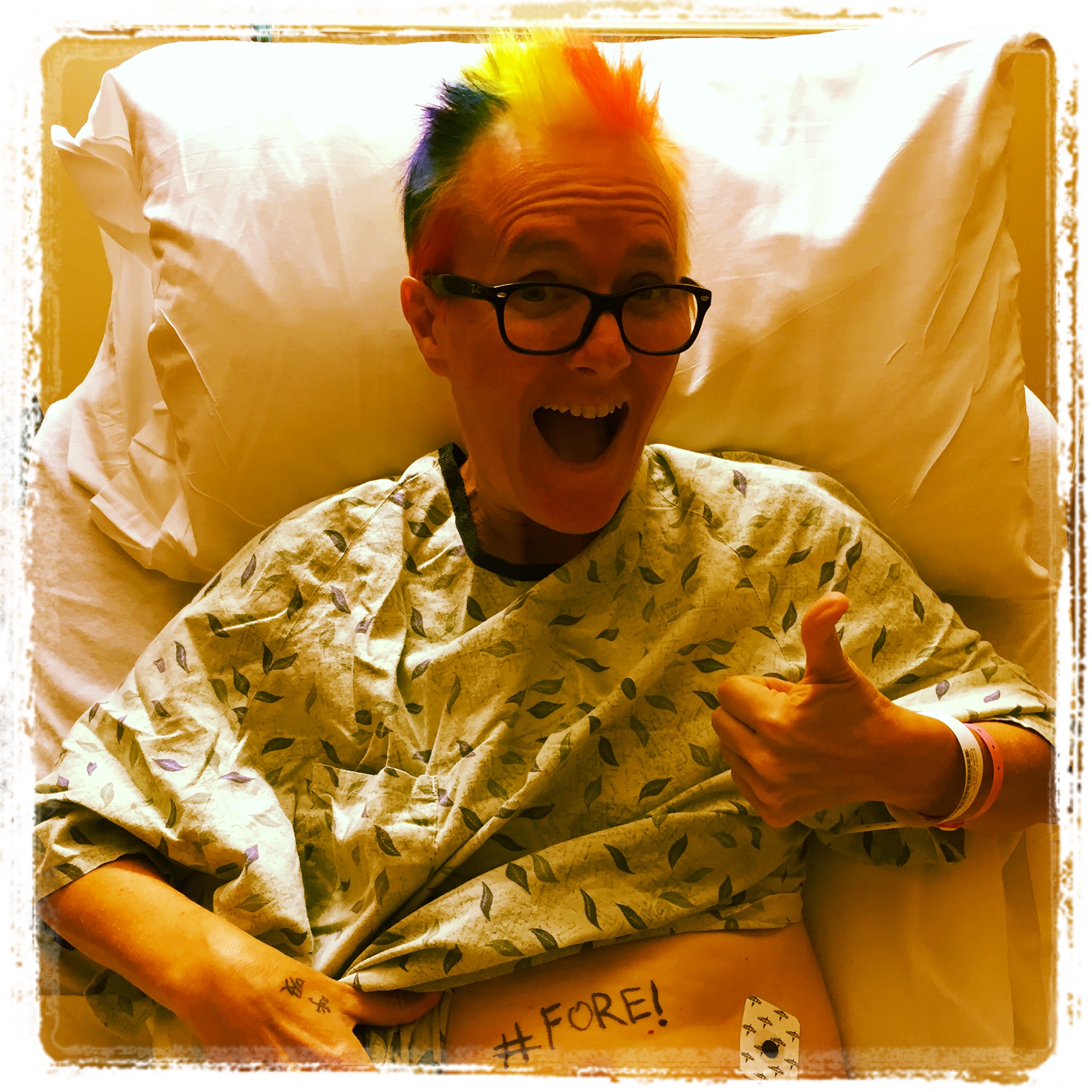 Since it’s high time for an update, not to mention, 5 0’clock somewhere, might as well cut to the chaser and spill the good beans: Got the pathology report yesterday and I pretty much got an A+. My gynecological oncologist hit the proverbial hole in one with #OperationOutDamnGolfBall last Monday. Golf ball extracted dissected sliced diced pulverized and shanked. No evidence of disease aka NED, thank God, thank Dr. Pulaski, and #fuckcancer.

Also, THANK YOU, everybody for all the love and prayers and good vibes and support and kind words. I always say this, but it for real legit seriously means the world to me. I am grateful for each and every one of you and super grateful to be in your thoughts.

The last update I posted was after the victory lap I took around the hallways after I had just passed the being able to pee before I was allowed to bust out of the hospital test. Here it is again, in case you missed it!

I’m reporting live from my home sweet home at the LoveShack now. It’s been a rough week, but here I am! Tuesday was a bit of a bumpy ride, trying to get ahead of the pain after the ride home and the 3 flights of stairs up to our condo. Actually, the first bump was right after that “Chariots of Fire meets Rocky meets Titanic” video, when I tried to get dressed to go home. With all of the swelling from the surgery on top of all the bloating I already had been dealing with, and then water weight from the IV fluids to boot…I couldn’t get my pants on. Had to borrow Dave’s belt and pull my shirt down as far as possible cuz the last thing I needed was to get thrown in jail for flashing everybody and their brother on my way home from the hospital.

Most of this hard week has thankfully not been about dealing with pain, but managing discomfort aka desperately trying to find some kind of a, any kind of a comfortable position aka enduring an uncomfortable position as long as possible before switching out for a new one. Luckily, my sweet M&M got me some fun “parting with a golf ball is such sweet sorrow” gifts to help me keep my head up during my recovery;)

Also, per doctor’s RX, I’ve been trying to get back on the treadmill and literally walk it off. She said I’ll heal and bounce back way faster, the quicker I get back at it. So #boing. I’m back. At it. I’ve worked up to a mile, and have walked a mile 4 days in a row. My #comeback is afoot. I figure if I’m gonna be uncomfortable anyway, I might as well multi-task and take a walk, soak in some fresh air and a little sunshine on my shoulders, walk off the discomfort, walk if I can’t run to get my fitness back again, walk off the swelling and water weight in hopes of one day hopefully SOON fitting in my own clothes again, instead of the hubcap’s Superman boxers I’ve been sporting around. 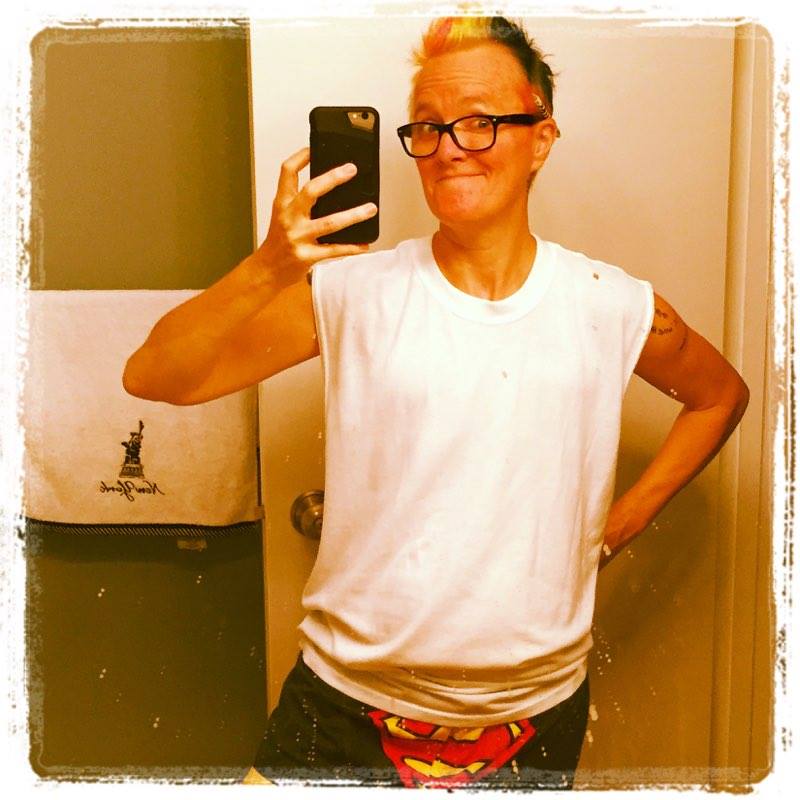 Sorry I haven’t updated sooner. Besides not being able to sit still or comfy enough to compose an update, I was waiting for the path report and then I wanted to let my Redheads know the happy news before I posted anything.

Here’s a pic of them serenading me and praying for me before my surgery. (We facetimed my sweet Amanda in, since she lives in Denver.) Always and forever: my 3 reasons. 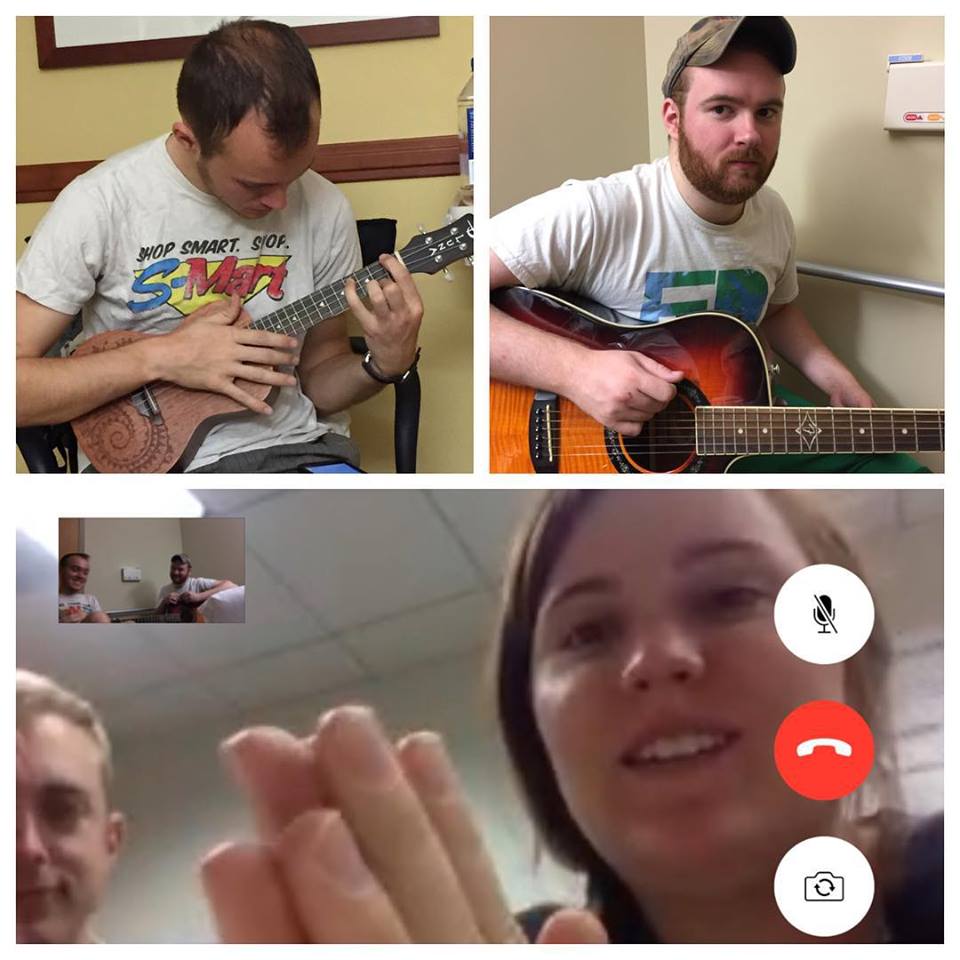 And here’s a video of the song they sang.

Lastly, besides the good news part of this post-surgery report, the other good stuff enquiring minds have been chomping at the bit to know what crazy shit I said while under. Unfortunately, nobody caught it on video because it hit me so freaking quick. Which doesn’t surprise me, cuz I had eaten pretty raw the week before, was on a liquid fast the day before, and hadn’t had anything to eat or drink for 13 hours. On top of already being a lightweight champion of the world ever since chemo. Anyway. so apparently, approximately 3 minutes after they gave me the happy juice in my IV, it hit so hard and fast it freaked them all out. Apparently, one minute the nurse was giving me the happy juice and the next minute I was saying this stuff is nice and the next minute I was trying to get all my peeps and docs and nurses and techs and everybody in the hospital to sign a petition for “marital marijuana” cuz this stuff is nice and all, but “marital marijuana” doesn’t have all the side effects this stuff has. So apparently, I’m for #maritalmarijuana. I mean, I knew I was for #medicinalmarijuana, and especially for cancer patients, but whoa the things you learn about yourself under the influence of the happy juice!

[Here’s my Rx for #WorldCancerDay: Keep Calm and Eat a Cookie. And this. An uber special guest post by my fab friend/survivor sister/Gracegoddess/CaliforniaGirl/FITtastic/greenthumb/rockStar cookie-baker Starling Wickes.]

Since it’s World Cancer Day, I thought I would share the Reason I’m still here.

We moved from Indiana to California in 2008 with Two 2 year olds and $700 in our pockets. I knew before leaving Indiana that I had a lump. I had been to my OBGYN, but we were trying to move. So, I decided to wait. After three months of being in California, I went to see my primary physician on my 34th birthday.

He immediately sent me for biopsies. After several attempts, I was diagnosed with Stage IIB Breast Cancer with 2 lymph nodes positive. I chose to have a double mastectomy, even though the Cancer was only on my right side. I also chose to do chemotherapy and radiation, because in my mind it was giving me a chance to “start over”, and rebuild my body the healthy way.

It wasn’t until I started chemo that I really understood how my use of cannabis, for the past few years, was really making a difference. I’ve always heard about how it helps, of course, but to actually live it, has been an incredible journey.

It was one day in Clinic C (Ha! How appropriate, right?), I was several weeks into chemo, after my third dose of A/C, (For those of you who don’t know, It’s Fucking nasty!) anyway, I was in to see my oncologist for follow up after treatment, when I realized, I was the only one eating a burger and chips, jamming to my music, and giving up my seat to a much (much) older woman who could barely keep her eyes open, when this lovely blonde lady approached me with tears in her eyes, begging me for my secret. To her, this was the nightmare she dreaded, being an actress in L.A.

However, by seeing one person who is living, instead of dying, was that little glimmer of Hope she needed.

I was taken aback at first because I saw the horror in her eyes. The scared Bambi look. I reassured her that it’s ok to be scared. We all are. But when i mentioned I was a Cannabis user, she said, “Tell me how! I want to be just like you.”

And so it began. I became an Advocate. An educator. A provider. A healer. A business.
I have documented in my files that “Alcohol hangovers have treated me worse than Chemo ever did!”
I’ve had several surgeries and very few problems healing.

My family have gone through many trials after moving, like being car jacked the week before chemo, being robbed and homelessness, but it hasn’t stopped us from living. I dedicate my life to my family, healthy eating and living, and advocating cannabis to other cancer patients, survivors and caregivers.

I believe everything happens for a reason, and we are all destined for greatness, whether today, or for future generations.

I was featured in the Ripped Goddess Calendar in 2014, as the RG for October, bringing awareness to a healthy, fit community.

I’m also part of a group called The Grace Project, a powerful photographic project by Isis Charise. The Grace Project’s mission is to empower breast cancer survivors to embrace their body image and basically to “wear their scars like stardust.” (Shout out to Amy Ferris for that gorgeous quote.)

Working with Isis was an experience beyond words. Isis makes you feel calm among a storm.

I started a healthy living page on Facebook, called Let’s Get Physical Cancer Sisters and Brothers!, helping to motivate other survivors, pre-vivors, & caregivers. Hoping to inspire them to get and stay cancer free, offering exercise, recipes and healthy information, keeping us accountable for our health!!

This is my mantra: “I believe things happen for a reason. People change so that you can learn to let go, things go wrong so that you can appreciate them when they’re right, you believe lies so you eventually start to trust no one but yourself, and sometimes good things fall apart, so better things can fall together.”~Marilyn Monroe