It was a long day, the day I sat with my girl Char’s son David during her breast amputation from her war with cancer. I know the pink, fluffy, more euphemistic term is mastectomy but when your friends keep dying from this bitch of a disease, or if you’re like me, flat as a walking billboard for breast cancer…well, euphemisms just don’t…”cut it”.

It is what it is, and I just feel like calling it like I see it when I look in the mirror and honor my own battle scars. Or when I try to buy a bathing suit. I mean, I’m a glass half full kinda girl, but even all my optimism isn’t gonna fill two empty cups, if ya know what I mean;) But I digress. It’s been a long day, trying to get myself to sit down and write this post about the celebration of life services for my friend Char, which will be on Saturday, July 11, from 2pm-3ish, at Cincinnati Vineyard’s chapel.

I was introduced to Char at my old church, and entered her story at that holy inciting moment right after her diagnosis, right before the amputation. This is how I meet more people than you can imagine. Unless you’ve had breast cancer too. Which I hope you haven’t and never will. #iamthe1in8 #youbeoneoftheother7

Anyway, Char and I were fast friends. #chemoisthickerthanwaterandblood So obvi, I connected her to the rest of our “cancer club” at church aka The Fellowship of the Bread, Wine, and Chemo, and to The Pink Ribbon Girls, the local breast cancer support group whose mission/motto is: No one travels this road alone, and to my oncologist, and to the Grace project, a  photographic project dealing with body image after breast cancer, which was pretty much ended up being Char’s last word to cancer.

Her battle against breast cancer was a long damn day. But it was also too damn short. 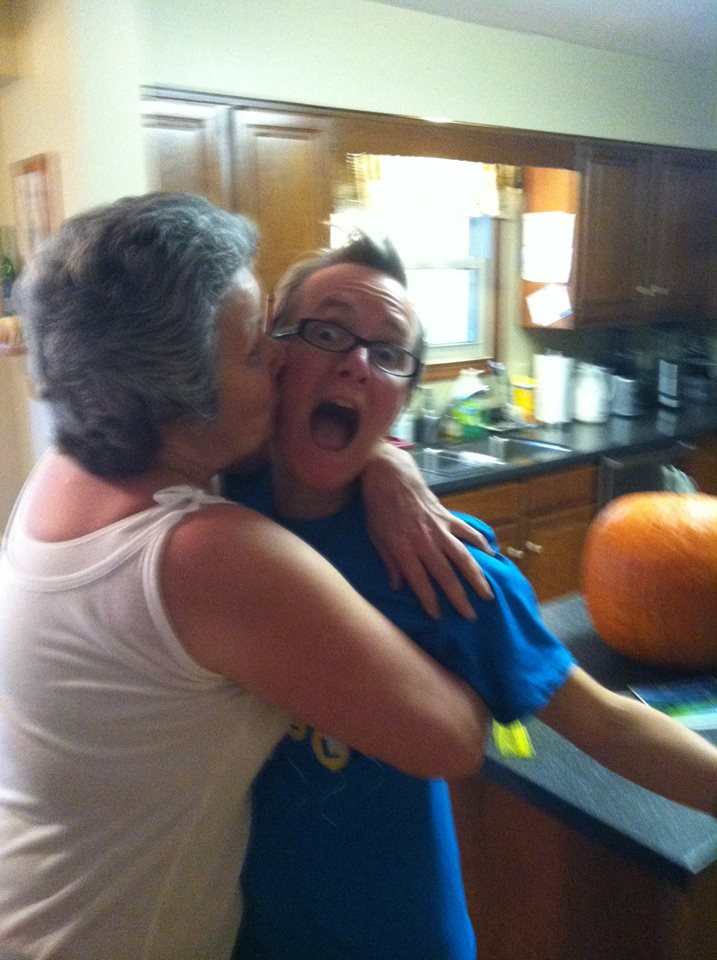 She loved me fierce and I will miss her something fierce. I imagine my girl Char tackled Jesus with a big fat sloppy wet kiss just like this, cuz O how she loves. She is the true BIG C; cancer ‘aint got nothing on my girl CHAR! But it sure makes my shoes feel so freaking heavy on my soggy feet.

I was on my way to visit her in the hospital when her daughter Ashley called me from Char’s side. The doctors had just told her that Char’s body was shutting down and the ventilator was the only thing keeping her here. Char was in unbearable, unspeakable pain. She was ready to go home, and definitely deserved the rest she had fought so hard to win.

Talk about “Just do it.” Char did. She kept the faith. She finished the fight. AND SHE WON NOT LOST. She is finished with cancer. #peaceout Char. I’m doing a victory dance for ya, sister…but I’m not gonna lie, there are tears.

Like I said, I was on my way to the hospital when Ashely called me. I was on my way out of town, to go run an all-night-long 10-hour endurance run, when when Char was admitted to the hospital a few days before, with what they thought was probs pneumonia cuz she had just done the #hungerwalk in Cincinnati a few days before. Only 3 days after chemo. And in the rain. I didn’t go visit her before the race, on my way out of town, because I was on an antibiotic and I was afraid to bring my germs with me. The hubcap went in my stead, and told her I was off to run a race, that I needed her to be on the job praying for me while she was resting in that chemo, and that I’d come visit her as soon as I got back. I also asked him rub her adorbs bald head for me, for good luck, which he did. And he and a friend from our “cancer club” prayed over her. On race day, another friend of ours, from The Pink Ribbon Girls, also checked in with her for me (Thank you, Kim) and reiterated my “charge” to Char, and also petted her sweet head for me. 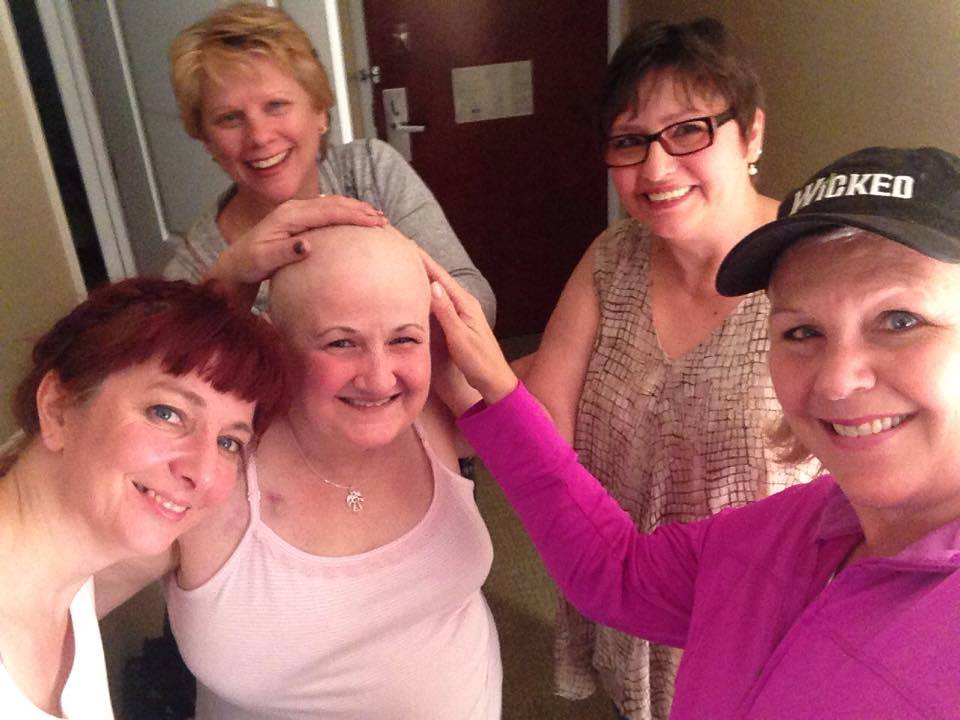 This selfie was taken at Char‘s Grace project photo shoot a few weeks before Char’s passing. Char’s shoot was in the midst of a weekend of events that I was producing so I couldn’t be at Char’s shoot…which freaking split me in two…but Char knew that and so she asked for one more pic…of everybody rubbing her cute bald head for me since i couldn’t be there. #thatsamore

I’d written Char’s name by my heart on my race shirt, and was so freaking excited to show her that, and my medal, and to give her the pink sock monkey I’d run with in a backpack on my back, to give to her. When I left the house that morning to come visit her, all anybody knew was that they were going to take her out of the coma. So I packed a bottle of my famous “Cancer is a” Bitch wine to come break bread with her in #fuckcancer style. And of course my medal to show off! It had been a long day, without my friend. And I was so. looking. forward. to telling her all about it when I saw her again.

I came. I saw my friend Char take her last breath. I was conquered. 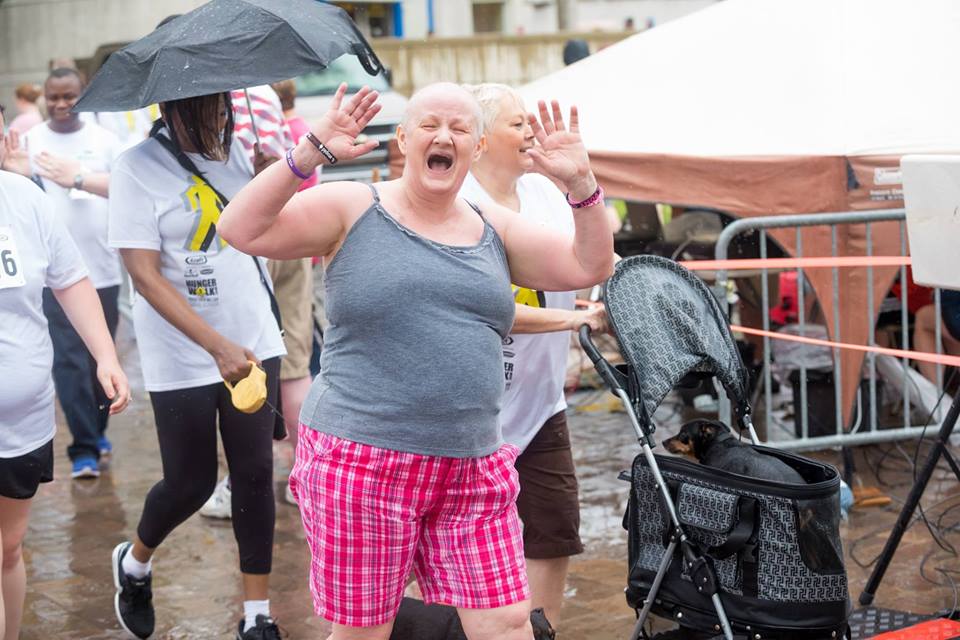 This was my crazy cancer ass kicking sister Char Scott.

This was her doing the #HungerWalk in #Cincy last week (Memorial Day).

This was 3 daze after chemo, which as everybody who has been there done that knows…is NOT one of the good daze.

This was one week before she was to shed that gorgeous shell, kicking cancer’s ass once and for all.

Even if today it makes me cry a little cuz I will miss her as fiercely as she loved me.

This was my friend who loved me fierce,

to fight hunger in her world.

This was my friend Char.

And she did it fierce and with reckless abandon.

And that is how I will remember her.

And this is how Char wanted to be remembered. Shortly before her passing, Char was so super freaking excited to participate in The Grace Project. Grace is a series of portraits of women who have battled breast cancer and suffered amputation in the waging of that brutal war. It’s a beautiful, powerful exhibit dealing with body image after breast cancer. Grace photographer Isis Charise finds inspiration for the project in Greek Sculpture #keepcalmandlovegreece so she frames the women in the context of Greek goddesses. Isis is in process of photographing 800 women across the country. The eventual Grace exhibit will demonstrate a day in the life of breast cancer. 800 women are diagnosed every day in our country. This has to stop. This is how Char wanted to be remembered. Beautiful. Empowered. Having kicked cancer’s ass. It was her last word. 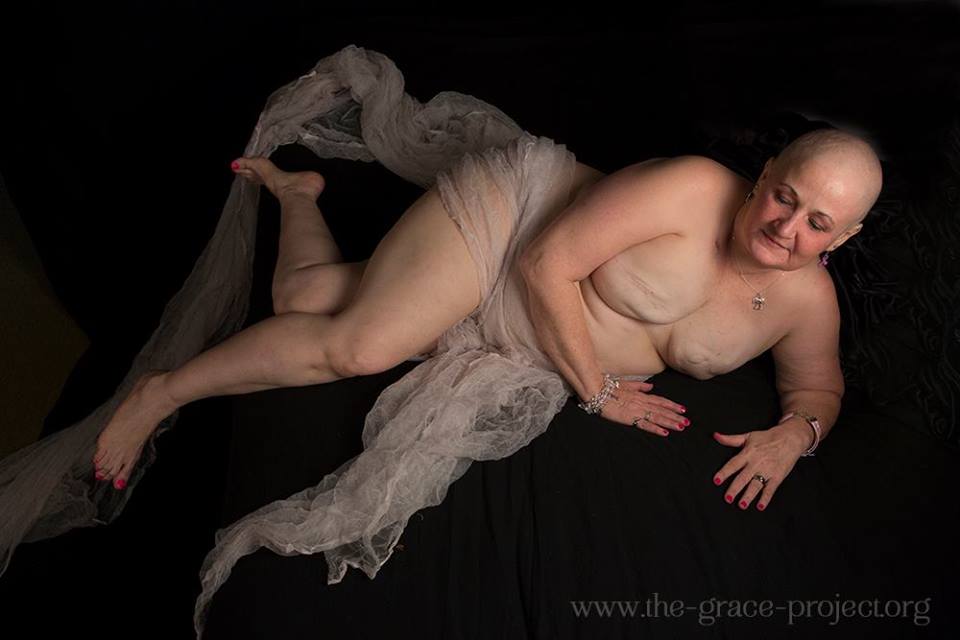 Immortal. The lovely Char‘s stunning gorgeous IMMORTAL Grace project portrait, taken by Grace photographer Isis Charise. Char was so. freaking. excited! and proud out loud to do her photo shoot, to become a Grace goddess, and especially, to be part of something so beautiful and meaningful and superpowerful for good. Grace is a series of portraits of women kicking cancer in the balls, and #shaken up the conversation on what is beauty? by empowering women who have suffered breast cancer and #amputation #MastectomyisaEuphemism of the parts society erroneously and cruelly deems as the critical lady parts…to battle through that shit as well, and embrace their body image and their own undeniable breathtaking beauty. #transcendencemuch? (Cuz what woman in America DOESN”T deal with body image issues?) This beautiful portrait of beautiful Char, taken on April 11, THE DAY AFTER CHEMO and 6 weeks before she shed that gorgeous shell, will hang with 800 others in an eventual complete exhibit…a beautiful breathtaking demonstration of ONE DAY IN THE LIFE OF BREAST CANCER IN AMERICA. (Yep, that’s what those 1/8 numbers mean. And that’s why we have to find a cure ALL THE CURES for cancer ALL THE CANCERS. #fuckcancer)