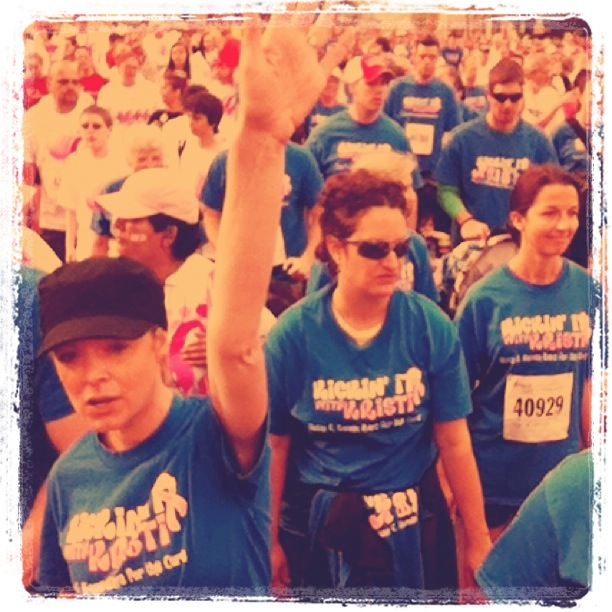 On Saturday I did the Columbus Race for the Cure with Team Kickin’ It With Kristi. That’s Kristi, leading her team of true blues in a sea of pink. And by sea of pink, think 50,000 peeps. Wow. Just wow.

She finished up 12 rounds of full brain radiation the day before the Race. Hopefully the radiation zapped all the cancer cells POOF gone. Later this month she will begin chemo which will hopefully shrink the tumors in her lungs.

Kristi is only 32. She just turned 32 on Easter. Her son, Chase, turned one-year-old the day before that. She also has a sweet little girl named Addison Hope, who is four-years-old. Addison’s middle name is not an accident. Kristi found out she was pregnant with Addison when she first found out she had breast cancer in 2007.

Addie’s a miracle, like hope is a miracle. She was born on Thanksgiving day, and after Kristi had gone through her first 4 rounds of chemo. Then she had 5 more rounds of “bad” chemo. Then a year of Herceptin. While Kristi was kickin’ cancer for the first time, she and Addie grew their hair out together.

I met Kristi right before her last chemo in December 2008. It was at a breast cancer event at my tennis club on a good week in between rounds 5 and 6, of my 24 chemo cocktails. The first thing I remember about Kristi was her smile and that she walked around like she’d just kicked cancer’s ass. And she had the cutest curly head of hair; I was in a pink Nike ball cap that said TENNIS on it. Meeting Kristi was like getting a postcard from hope. 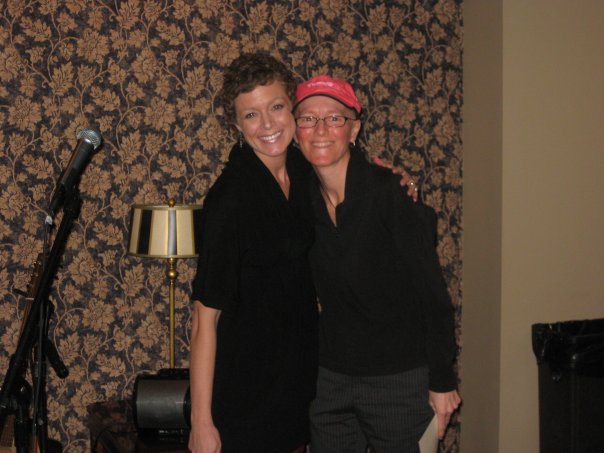 The postcard had a p.s. with a tennis club membership to get me back out on the courts where my hat was tickled pink at the thought of being. Kristi had received an award from the Tiffany Foundation at the Five Seasons Sports Club’s Ballers Against Breast Cancer event in 2007, when she was pretty much wearing my hat, so to speak. I was in awe when Kristi spoke and shared her story. She said Addie had just turned one. Addison Hope. She had only one more round of chemo to go. So much hope. I was in a chemo fog or something when she mentioned the Tiffany Award and called my name because I did not see it coming. But the tennis was definitely something I looked forward to. Hope.

Hope happened. Fast forward one year, to December 2009, and imagine Kristi with even longer goldilocks, and me without even a hint of a wave in my own new du, but a bunch of salt and pepper, straight up, on top. Imagine that I am back out on the courts by then, and my team is even going to win the play-offs that week. And imagine that I only have one more round of chemo left. Just like Kristi did the year before. And just like Kristi, I got to give the Tiffany Award to the recipient: Mary Jo Cropper. Which was quite humbling, since I had my mammogram at the breast cancer center named after her—in a way she helped saved my life.

Life happened. Fast forward another year, to December 2010, and imagine me having kicked cancer like Kristi, and now trying to figure out life after cancer.

Fast forward to Saturday’s Race and we’re all blue and wearing Kickin’ It With Kristi t-shirts. Cancer happened. Kristi’s fighting for her life again. And she’s going to kick cancer again. 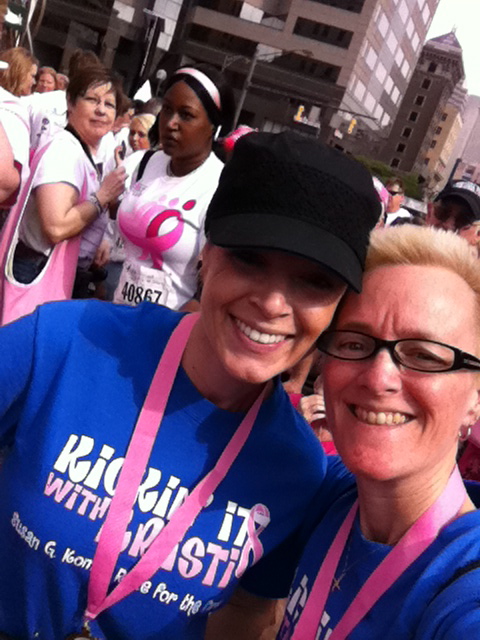 Please pray for her whenever you think of me. If you’re on Facebook, please join the prayer chain for Kristi Frazier. Let’s kick it with Kristi.

I’d like to see this sign with Kristi holding it next year (then me the next cuz I’m such a freaking copycat): 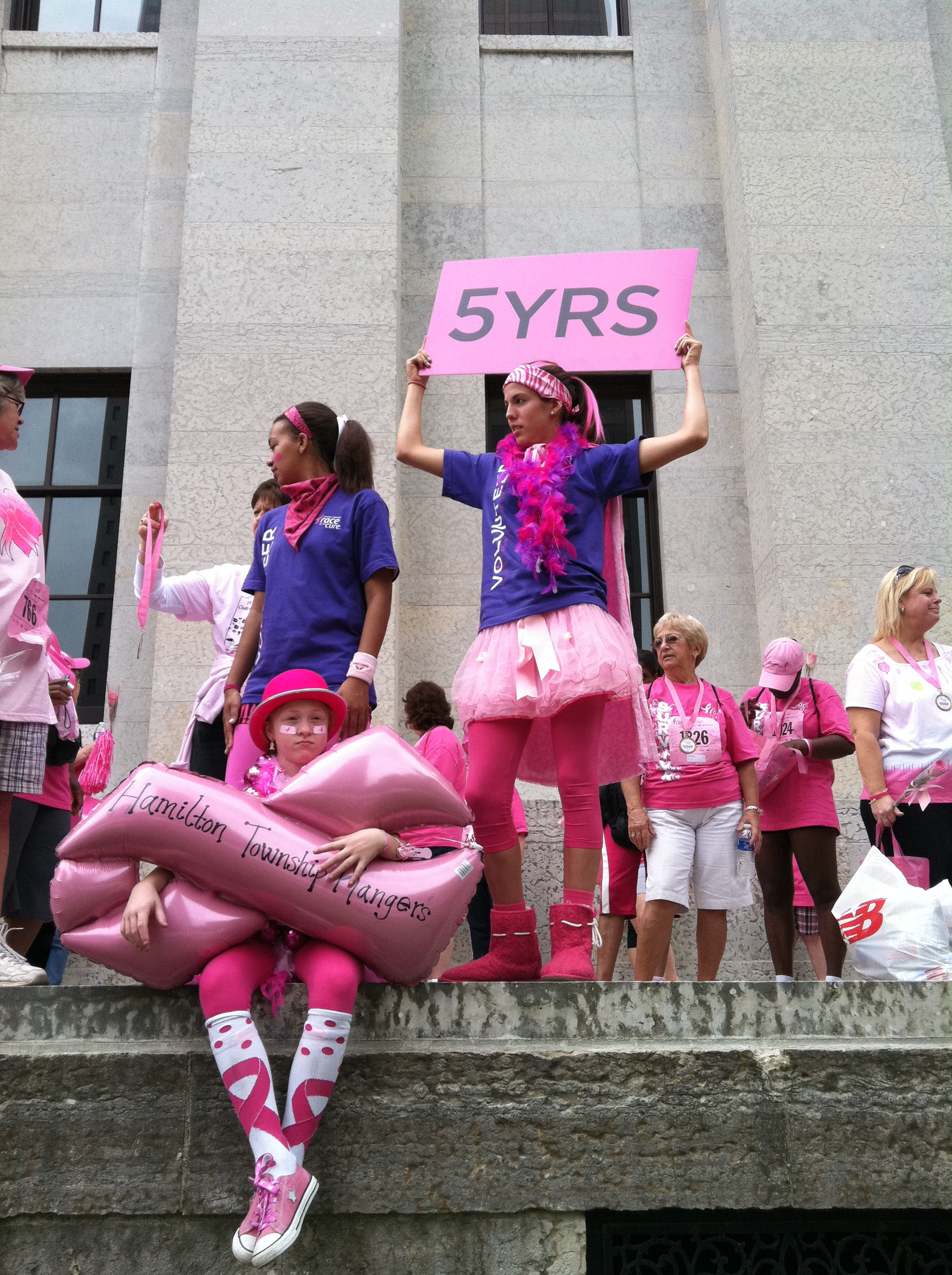 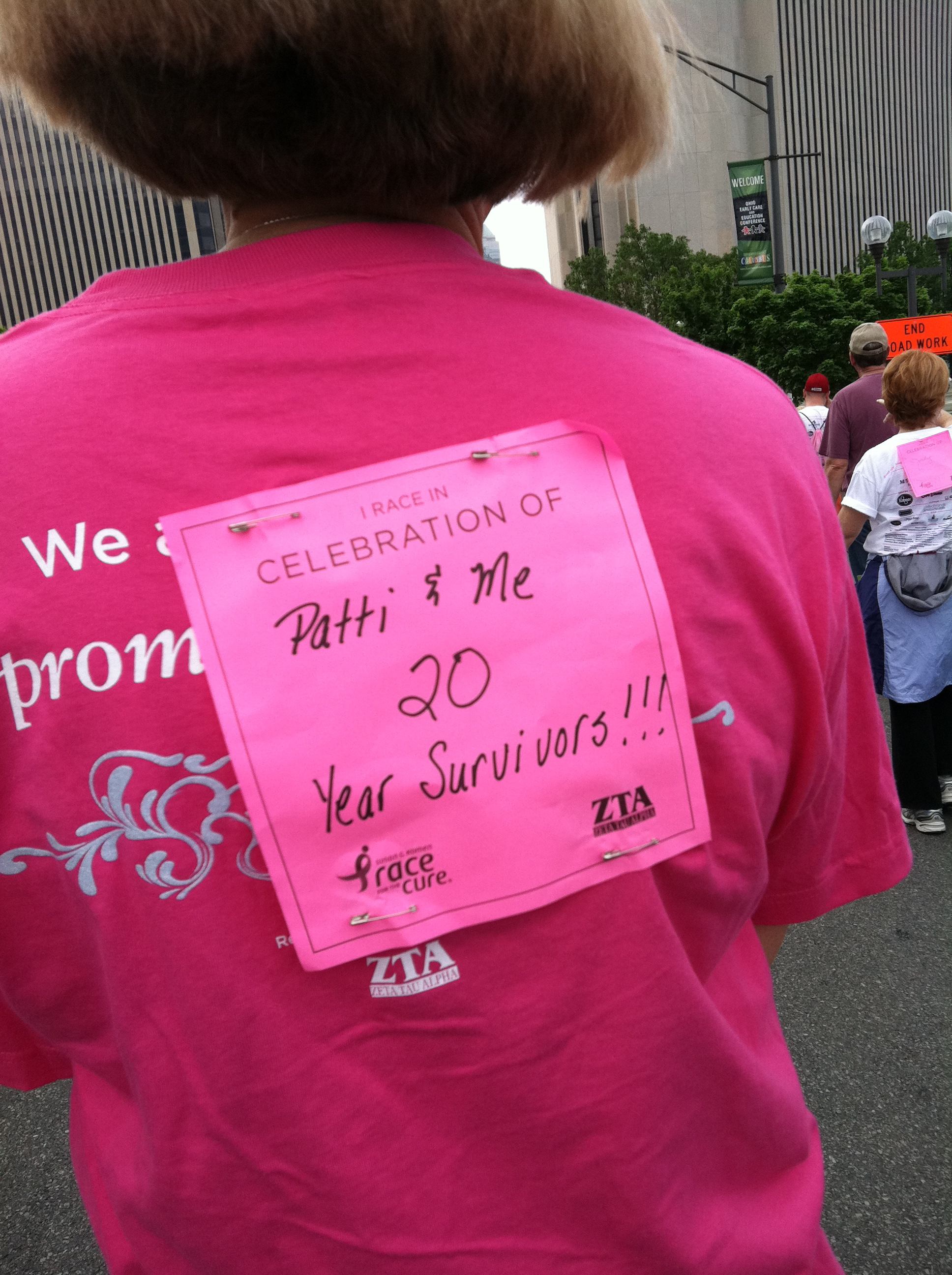 Although, in 15 years Addie will be graduating high school, and my Amanda will be getting regular mammograms. So I hope there won’t even be a Race for the Cure because I hope we’ll find one before then. 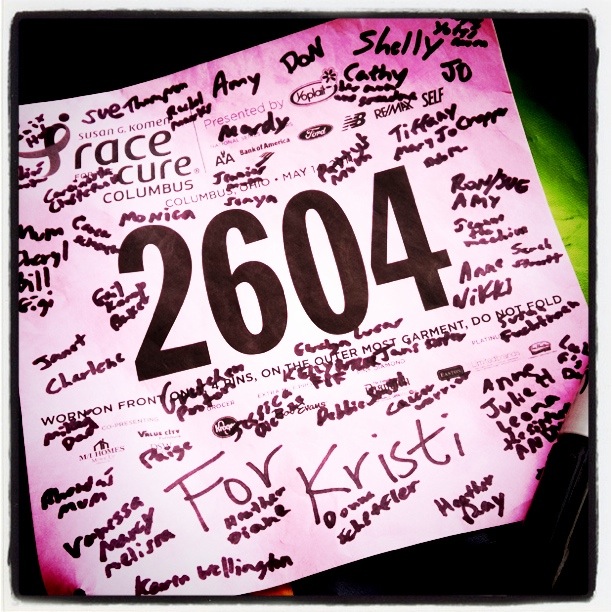